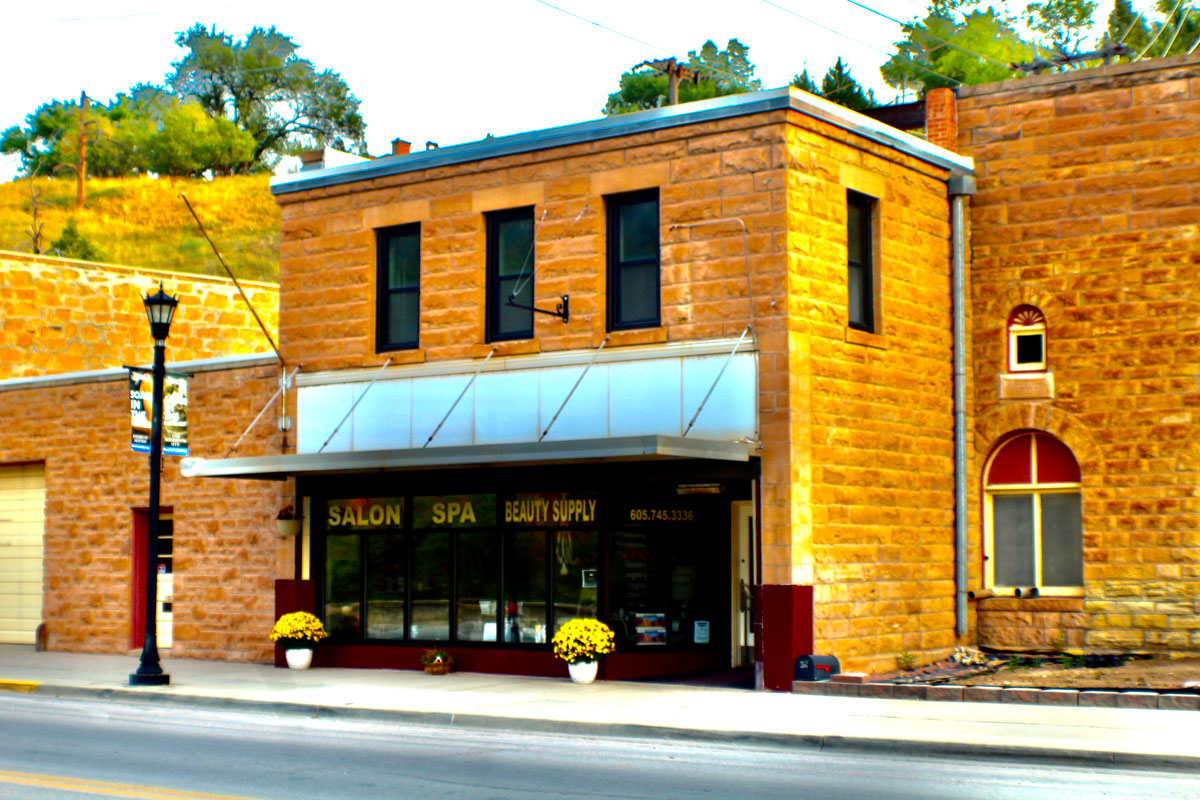 Jason (Oglala Lakota) and Resa Rutz recently purchased one of the Picture City’s historic sandstone structures, the Water, Light and Power Company building located on North River Street. Polished Salon & Spa, owned by Resa, relocated to the building’s newly remodeled ground floor suite this summer. The couple completed an extensive remodel of the upper floor and opened it in November as a vacation rental known as The Loft.

“We tried to keep as much of the original features as we could in the entire building,” says Resa of the remodel work, which took a total of eight months.

Much of the test kitchen that was installed in the upper floor during the mid-twentieth century was still intact when the Rutz’s purchased the building early this year. The test kitchen served as a training area for local women who wanted to master the more technologically advanced appliances of the time. An appliance store was conveniently located on the ground floor. Built in 1902, the structure was originally home to Hot Springs’s first energy company. A turbine that generated power for the town from underground waterways remains in the basement to this day.

Two additions, one added in the 1920’s and the other in the 1950’s, are large shop areas. Even though the Rutz’s are currently looking for tenants for those spaces, Resa says the business of being a landlord is going really well.

“We already have our first booking for the rental upstairs and the salon is generating income,” exclaims Resa.

The Rutz’s have celebrated several entrepreneurial successes recently, but like most families, they have experienced ups and downs through the years. When they first moved to Hot Springs in 2016, the couple was receiving help from the Supplemental Nutrition Assistance Program and couldn’t afford anything extra, like football for their children.

“We weren’t raised with a lot of opportunities, and having young children made it hard to put yourself into work and do things,” explains Resa.

They persevered through tough times by continuing to work hard and taking calculated risks, key traits of successful entrepreneurs. Jason leveraged his experience in the professional equine field to gain employment; Resa started her own salon and then got into real estate a few years later. Their efforts began paying off.

“When this historic building came up for sale, we decided to go for it,” says Resa.

Unfortunately, traditional lenders didn’t see the same level of business potential in the historic building as the Rutz’s did. Determined, Jason and Resa began working with Lakota Funds to secure financing for the real estate purchase. As an unregulated lender, Lakota Funds has more flexibility in the terms we can offer, which is more favorable for start-ups. We utilized funds from Wells Fargo's Open for Business Fund program to provide a low-interest rate loan.

Once the transaction was completed, the Rutz’s went straight to work on their entrepreneurial venture. Reflecting on their achievements so far, Resa acknowledges the pay offs of staying the course and taking chances.

Tawney Brunsch Named Emerging Leader of the Year
May 27, 2022