Scatter Their Own is an alternative rock duo comprised of Scotti Clifford (guitarist and vocalist) and Juliana Brown Eyes (bassist and vocalist), both of Oglala Lakota ancestry from the Pine Ridge Indian Reservation of South Dakota. Formed in 2011, Scatter Their Own has traveled from Canada to Texas, and also from California to New York City, scattering their own music to all nations in all directions. Occasionally joined by their children on stage, Scatter Their Own often becomes a family effort. Their children, Scotti Jr. (drums) and Wahpe (vocalist), began to delve into their parents’ love of music at the tender ages of 12 and 9.

Scatter Their Own is currently recording their second album that will peek in on the duo’s charismatic connection onstage and also showcase their endearing harmonies coupled with moving anthems of relationship to mother earth, inviting you along on their sonically mystical path. Like Scotti & Juliana, Scatter Their Own’s music is diverse in influence and style, but bonded together by an undeniably creative journey. 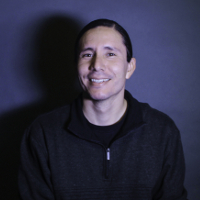