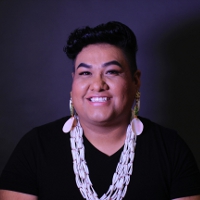 Aloysius is an enrolled member of the Oglala Sioux Tribe. He currently resides on the Pine Ridge Indian Reservation in Oglala, South Dakota. Aloysius is currently attending Oglala Lakota College in pursuit of a degree in Lakota Studies. He is an accomplished traditional and modern design beader. He is self-taught, learning at the tender age of 10 years old. He recalls seeing a pair of old beaded Calvary gloves in a museum when he was 10 and becoming inspired to learn the traditional methods of Lakota beadwork. As a child he would save his money to buy beads at powwows while his peers spent theirs on toys and candy.

Aloysius believes the traditional arts are just as important as language. He strives to do his part in keeping Lakota artwork alive. No matter where he is or what he’s doing, he always manages to bead something every single day. He talks fondly of his beads, as if each had its own individual spirit. He treats each completed piece with love and care knowing that his good intentions will one day inspire a young artist just like him.

Although Aloysius studied the traditional Lakota techniques of beading, he creates his own designs taking by those teachings a step further. In describing his beadwork, he states that his pieces are “for the modern man and woman.” He wants his beadwork to reflect not only the time we are living as modern Lakota people, but also the beauty and resilience of young Lakota youth. This is what sets his designs apart from those before him – his artwork comes with a purpose and a powerful message.